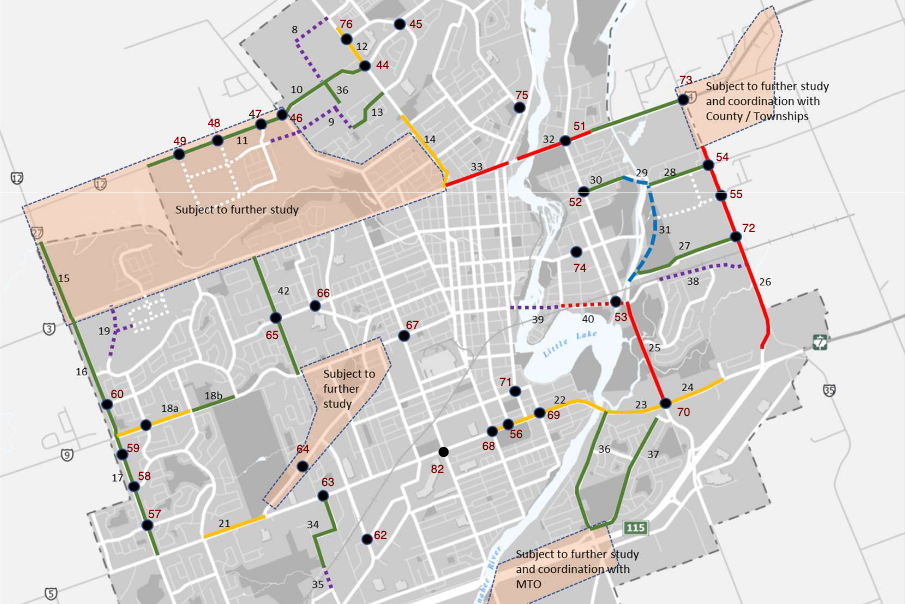 City eyeing $908 million for transportation infrastructure over next 30 years. What will it buy?

The bulk of spending will go to street widening and other road projects, despite City’s goal to reduce car dependence. Part two of our three-part look at Peterborough’s transportation master plan.

Update: Council gave final approval for the plan to spend $908 million on transportation infrastructure over 30 years on Monday March 28, but nixed the proposal for a new bridge over the Otonabee River between Sherbrooke and Maria streets.

City councillors will consider a plan to spend an estimated $908 million on transportation infrastructure over the next 30 years, at Monday’s general committee meeting (March 14).

The majority, $684 million, would flow to “road improvement” projects, including widening sections of Lansdowne Street and Chemong Road to five lanes, widening Parkhill Road and the Inverlea Bridge to four lanes, and building a new four-lane bridge over the Otonabee River downtown.

The projected spending – which would have to be approved in future budgets – is to implement Peterborough’s new transportation master plan, which will guide changes to the city’s transportation network as the population swells to a forecasted 125,000 people by the middle of the century.

In an effort to get more people to ditch their cars, the plan also calls for $206 million over 30 years for things like new transit buses, cycling infrastructure and construction of sidewalks along streets where they are currently missing.

In this second part of our series about the transportation plan, we look at the road and bridge construction projects city hall is eyeing, along with plans to boost parking fees and change parking requirements for new developments.

A new four-lane bridge over the Otonabee River

Millennium Park is a popular spot to relax by the river on a hot summer evening with an ice cream cone from the Silver Bean Café. But it could get a lot noisier in the future, if plans to build a four-lane bridge over the Otonabee River, just south of the park, go ahead.

The bridge would span the river less than 100 metres south of the Silver Bean’s waterfront patio. It would connect Sherbrooke Street downtown with Maria Street in East City.

As Peterborough’s population grows, pretty much all of the existing bridges over the Otonabee will be over capacity by 2051, transportation planners say. Their fix is to build a new bridge and widen the existing ones on Nassau Mills Road and Parkhill Road to four lanes.

But you’ll still be able to eat your ice cream in peace for a while to come. If the bridge gets built, planners say it probably won’t happen until closer to 2051.

And it might carry more than cars: there’s a chance that trains could use it as well. VIA Rail has plans to run a new high-frequency rail service through Peterborough. It is expected that the existing CP Rail line, which passes by the old train station on George Street, will be considered as a route option, wrote City spokesman Brendan Wedley in an email.

But the proposed Sherbrooke-Maria bridge may also be on the table as a route for trains to cross the Otonabee River, although it’s “too early to speculate on the feasibility of this idea,” he wrote.

No Parkway extension, but other streets to be widened

Along with shelving plans to extend The Parkway, council made another consequential decision about roads recently that could have a long-lasting impact on the city.

Last November, councillors voted to change the criteria used to decide when to widen streets. Congestion will now be allowed to reach a higher threshold before road widenings will be considered. The thinking is that being stuck in traffic is good motivation for people to ditch their cars and try cycling, walking or taking transit, according to a staff report.

However, city staff are still proposing almost $684 million in “road improvements” over the coming decades, including a slew of road widenings.

A long stretch of Parkhill Road, from Chemong Road all the way to Armour Road, would be doubled to four lanes. The same goes for Maria Street in East City, to accommodate traffic from the proposed new bridge over the Otonabee River.

Other streets would be widened to five lanes, to add centre turn lanes. That’s the plan for most of Lansdowne Street east of Park Street, as well as for a good chunk of Chemong Road. Water St. would also get a centre turn lane north of University Heights Boulevard, and it would be doubled to four lanes from Trent University to the city limit.

Meanwhile, Ashburnham Road would be widened from three lanes to five lanes, from Maria Street down to Lansdowne Street.

Some of the streets being eyed for new traffic lanes, such as Parkhill Road, are in established neighbourhoods, where homes and businesses sit close to the street. It’s not clear if city hall would need to acquire and demolish any of those buildings to add traffic lanes. That level of detail would be left to future environmental assessment studies and design projects, Wedley wrote. City hall has the power to expropriate land, but it would only do so if “negotiations do not result in an amicable agreement to purchase a subject property,” he wrote.

City hall has a map and full list of the proposed road projects on the Connect PTBO platform.

Another change drivers can expect in the coming decades: higher parking fees.

As a way to nudge more people to walk, cycle and ride transit, city hall plans to boost the cost of parking downtown and expand paid on-street parking to other neighbourhoods outside the downtown.

Councillor Dean Pappas, who owns a billiard hall on George Street, has said that higher parking fees would hurt downtown businesses. But transportation planners say that’s not the goal.

“When we’re talking about increasing parking rates, we’re looking at people who are parking all day – we’re not trying to penalize local businesses and their customers,” said consultant Brett Sears of WSP group, at a virtual public consultation on the transportation master plan in February.

The aim is to increase all-day and monthly parking rates, to encourage people who work downtown to leave their cars at home, Sears said.

But the cost of short-term parking will stay the same downtown, so as not to discourage shoppers from visiting local businesses by car, he said.

Calling for higher parking rates “doesn’t necessarily make me perhaps the most popular person,” he said, “But we think it really is part of the solution.”

You might have to scrounge together some change to park at municipal buildings, such as arenas, the Sport and Wellness Centre and city hall, in the future as well. That was one idea planners floated at February’s public consultations on the transportation master plan.

Last year, the City of Toronto relaxed rules requiring developers to provide a minimum number of parking spaces for most of the new homes and condos they build, in an effort to reduce car dependency.

The goal was to encourage more residents to walk, cycle and take transit, as well as improve housing affordability, since parking spaces can drive up the price of real estate.

The plan is mum on what that would look like. But one idea on the table is requiring fewer parking spaces for new developments in the downtown and along “intensification corridors,” where future growth will be concentrated, Wedley wrote.

Peterborough’s new official plan already allows city hall to consider lower parking requirements on a case-by-case basis in dense areas, but any further changes to parking rules will be considered as part of a future update of the City’s zoning by-laws, Wedley wrote. That is expected after final approval of the new official plan.

This article is the second in a series about the City of Peterborough’s transportation master plan. Read part one here. 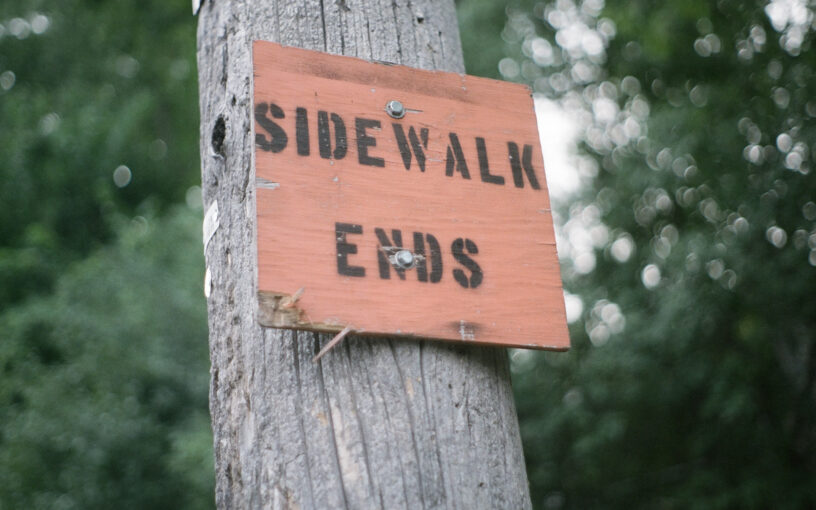 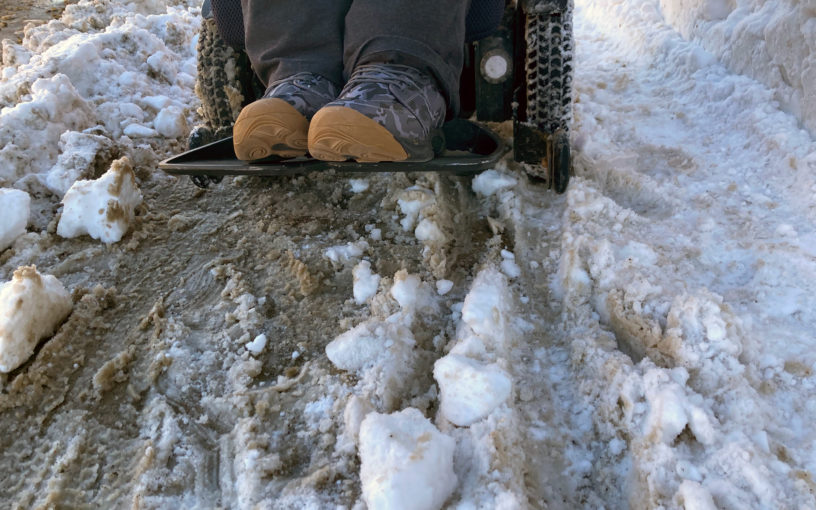