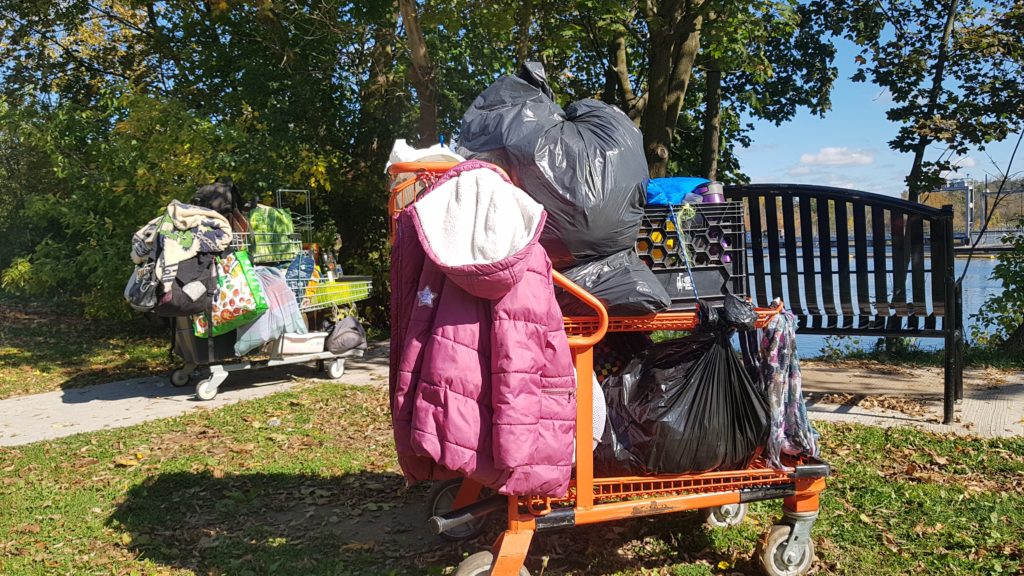 Two shopping carts hold the belongings of Rebecca and Hank, a couple experiencing homelessness. The couple cart their belongings around Peterborough every day; sleeping in parks and doorways during the night. They are two of dozens of people who are homeless and sleep outside of the city's shelter system. (Photo: Brett Throop)
Housing

City data shows there are only seven vacant shelter beds available for adults on an average night. But with more than 100 people experiencing homelessness outside of the shelter system every month, advocates say another legal option is needed.

On a sunny October day, a woman in her early thirties packed up her belongings after a night sleeping on the ground, near the London Street footbridge in downtown Peterborough. Rebecca carefully folded the blue tarp that was the only protection she and her partner, Hank, had from the elements overnight. Nearby, Hank loaded a shopping cart with more of their things, wincing in pain from an untreated infection spreading up his right leg. (We’re not using the couple’s real names because of the stigma they face for being homeless).

With the nights already turning frosty, Rebecca and Hank were bracing for another winter living outside, something they have survived together before. “Barely” survived, Rebecca said. “There were some nights that were really cold. I ended up waking him up in the middle of the night and telling him that we had to go to McDonald’s and buy coffee and warm up.”

The couple are not alone in enduring homelessness outside of Peterborough’s emergency shelter system. Between May 2020 and May 2021, there were an average of 105 people per month experiencing homelessness in the city and county who slept somewhere other than a shelter most nights, according to data obtained from the city. It’s not known how many of those outside the shelter system were sleeping rough in parks and on the street; the data lumps them together with individuals who were couch surfing, sleeping in vehicles, staying in motels, incarcerated, or admitted to hospital or treatment centres.

But Christian Harvey, executive director of One City Peterborough, said it is clear that there are not enough shelter beds for everyone sleeping outside. His organization obtained data on the situation through freedom of information requests to the City.

Peterborough’s four emergency shelters have 91 beds in total. The data shows that between January and August of this year, there were an average of 13 vacant beds per night, six of which were only available to youth. Harvey said he personally knows more than 13 adults who sleep outside most nights. “We can, I think, make a logical conclusion that there are more people outside than there are spaces in shelter,” he said. “I think we’re in a crisis around shelters.”

To ease the situation, Harvey is calling on the city to suspend its ban on erecting tents in city parks, which was brought in after an encampment sprang up in Victoria Park in 2019. Under the Parks and Facilities bylaw, bylaw officers can order someone to remove their tent and, if they refuse, issue a fine for between $200 and $10,000 per day that it was up. They can also ban people from parks for up to six months.

But the bylaw also allows for an exception to that ban. It gives the city’s chief administrative officer the power to permit tenting in parks if the number of people in need of shelter in the city exceeds the number of emergency shelter beds. “We’re at that point,” Harvey said.

Peterborough Currents requested an interview with City CAO Sandra Clancy, but she was not available. Sheldon Laidman, commissioner of community services, said a suspension of the tenting ban is not on the table. He said there are enough beds available for those willing to sleep in emergency shelters, but some people “prefer” to sleep outside.

“We provide a professional shelter system that’s funded appropriately and is sized to meet demand at this point in time,” he said. It is “extremely rare” for anyone to be turned away because of lack of capacity. And when the shelters are full, he said “alternative options” are made available for people (he would not say where people are accommodated when that happens).

Rebecca stayed in emergency shelters during another period of homelessness in the past. But when she and Hank again found themselves without a roof over their heads this summer, they did not turn to the shelter system. “We don’t like to be separated,” Rebecca said. Only the Wolfe Street overflow shelter admits both men and women (the Brock Street Mission is only for men and Cameron House is only for women), but there’s no guarantee that couples will get to sleep in the same room. “We have too much stuff also to go into a shelter,” she said.

Laidman acknowledged that the shelter system “does not meet the needs of everybody,” but he said tenting is not the answer. “Allowing tenting in a particular park is not a solution that the city wants to support to end homelessness,” he said. “The city is working towards having housing available to all because that’s really the solution for homelessness.”

Laidman said that city officials have not determined under what, if any, circumstance they would allow tenting. “We don’t have a prescribed way that we would assess that situation currently,” he said. It is an option the CAO may consider “if she feels that it’s appropriate,” he said, but the bylaw doesn’t require her to do so.

Harvey agreed that tenting won’t solve homelessness. But the city still has a long way to go to achieve its goal of creating enough affordable housing to end chronic homelessness. In the meantime, people will continue to sleep outside. Harvey said penalizing people for it only makes the situation worse. “We need to actually make very real change, or else this is just going to continue,” he said.

“The city still has a responsibility to people, even if they’re evicted from the shelter system”

On a chilly fall day recently, Mark Anthony Hale flipped through an adult colouring book, sitting at a picnic table outside of One City Peterborough, on Water Street.

Colouring is not just a hobby for Hale, it’s therapy. When he stopped using crystal meth this summer after five years living with addiction, he needed something to keep his mind occupied, he said. So he got himself a colouring book. “I love this. I don’t know why,” he said. “I love the colours.”

Hale has tented all over the city: Confederation Square, Jackson Creek Park and lately, a parking lot in the south end. He shivered through the previous night there, unable to get much sleep as the mercury dipped toward the freezing mark. He knows what the cold can do to the body. He said he still has no feeling in some of his fingers after getting frostbite while sleeping outside four years ago. At 49, he said he worries that he won’t be able to endure many more freezing cold nights. “That could kill me at my age,” he said.

But lately, Hale has nowhere to go to escape the cold. In September, he was banned from the city’s emergency shelters for 90 days after he was accused of injuring another man in an altercation, he said. He denies that he did anything wrong. “For an older person like myself, that’s too long,” he said.

The city should allow people to pitch tents in parks when they have no other option, he said. “If they’re quiet and clean up after themselves, why not?”

Hale is among dozens of people who are banned from Peterborough’s shelters every quarter, as Peterborough Currents reported last year. Those individuals need a legal place to sleep, Harvey said. “The city still has a responsibility to people, even if they’re evicted from the shelter system,” he said. “They have nowhere to go.”

With no legal option to get a night’s rest, many people are forced to hop from one city park to the next to avoid the scrutiny of neighbours and bylaw officers, Harvey said. Constantly being on the move like that takes a negative toll on mental health, he said. “The impact of realizing that people don’t care where you go – that the want is for you to disappear – it’s huge.”

The hunt for a dry, safe spot to set up a tent can eat up a lot of someone’s time and energy, and can make it harder to connect with social services that could help them escape homelessness, Harvey said. “You’re committed to survival,” he said. “So connecting to services becomes secondary.”

Rebecca knows that reality all too well. As the Otonabee river flowed behind her, she tied three colourful scarves to the front of her shopping cart so she could pull it behind her when she got tired of pushing. “Makes it easier,” she said. She and Hank spend hours each day pushing and dragging their carts over bumpy sidewalks. They have to move locations at least once a day, sometimes more, she said.

Back in the summer, the couple had two tents. Then, one of them was stolen, Rebecca said. “People just go through our carts when we’re sleeping or whatever.” They also had a third shopping cart. But Rebecca said it was taken by city workers after bylaw officers ordered them to leave a park recently. That cart contained their other tent, their winter clothes and some food.

Laidman responded by saying it’s not City policy to take people’s belongings when they are caught tenting. He said bylaw officers are supposed to give people a certain amount of time to remove their belongings. Then public works staff clean up any items left behind.

He also said that if someone needs a place to store some of their belongings, they can be given access to a locker outside of the Salvation Army on Simcoe Street, or space in a City-owned building.

Does the shelter system need to change?

Rebecca and Hank have had nothing but a tarp to protect them from the rain and cold, since losing their tents. This winter they will “probably just freeze like before,” she said. But at least they will be together.

According to Harvey, if the city doesn’t want people to sleep in parks, it should take a closer look at why the emergency shelter system isn’t working for people like Rebecca and Hank.

But Laidman said it would not be “feasible” for the city to provide different types of shelters to accommodate everyone experiencing homelessness. “We’re not able to offer multiple options for every single circumstance,” he said. “We are offering four different emergency shelters that the city supports and that is a significant investment to offer persons as an alternative.”

Back at the picnic table, Hale closed his colouring book and prepared to trek back to his sleeping spot in the south end. He still had weeks to go before he could return to a warm bed at the Brock Mission. He said he was taking it one day at a time and trying not to think about the increasingly cold nights ahead of him. “I’m just grateful to be alive today,” he said. 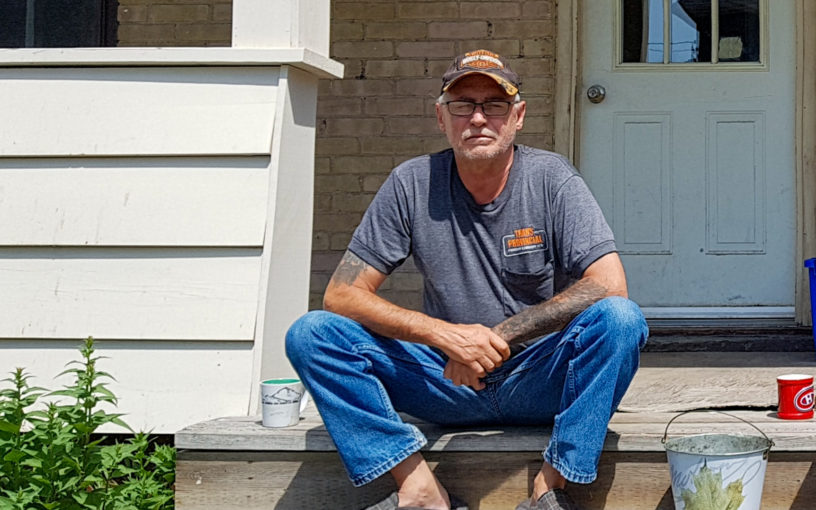 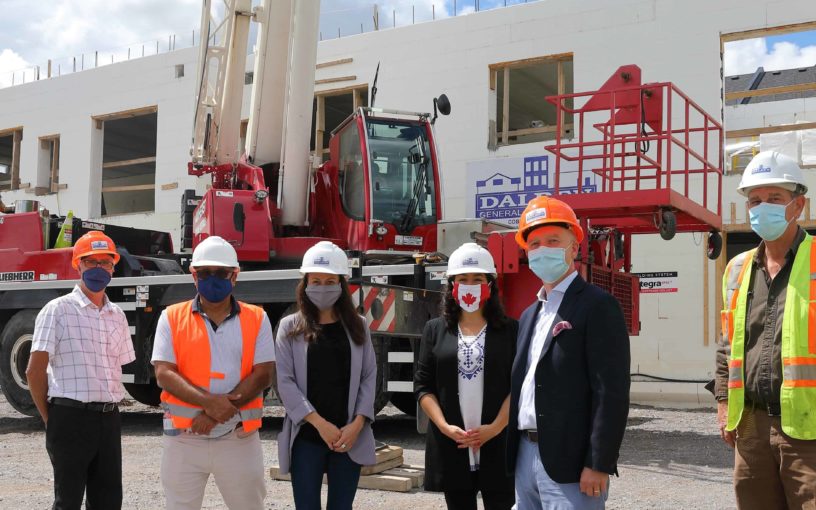