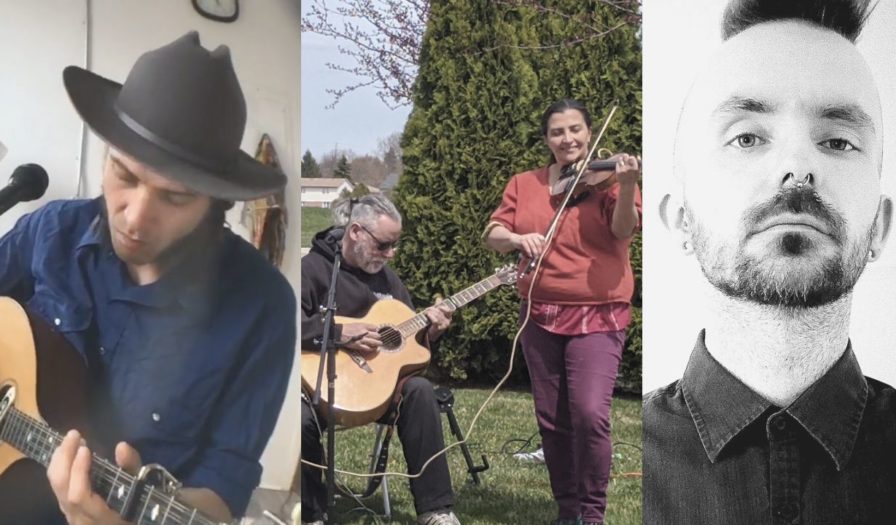 With venues closed and many summer festivals cancelling their 2020 editions, many musicians are finding themselves without work and without a way to share their art. Peterborough Currents caught up with four local musicians to see how they are adapting to life without gigs.

Benj Rowland is a folk musician and one half of the Peterborough duo The Mayhemingways. Since the pandemic began, Rowland has been playing live shows for a digital audience through his Facebook page.

Twice a week, he sets up in front of a camera to play music for his fans online – drawing an audience of local supporters and fans from across the country.

At first he worried the format was becoming a cliché as so many artists turned to live video broadcasts, but he wanted to try this as an alternative form of busking. “I usually play at the [Saturday] farmer’s market in Peterborough when I’m around,” says Rowland. “I was thinking of it initially as a busking thing. Not really as a performance but more of a longform thing.”

Rowland posts links to a PayPal page where viewers can send him money directly. “I thought it would be the type of thing where a lot of people would leave a small amount of money,” he says. “But online it seems to be that a few people throw in a larger amount of money.”

He has also noticed that some viewers tend to stick around and watch the full stream, rather than pause for a few moments then moving on as when busking. He says this makes the performance feel a bit more intense, and he’s thinking of it less like busking and more like performing now.

Rowland broadcasts on a regular schedule twice a week on Tuesday evenings from 5:00 to 7:00 p.m. with original songs and covers, and on Saturday mornings from 9:30 a.m. to 12:30 p.m. where he plays longer form folk music.

Pre-pandemic, Rowland relied on performing for his income. “I made my living playing live shows, so that’s obviously over,” he says. Earlier this year, The Mayhemingways had a few tours planned for the spring and summer months that were cancelled. “A couple months ago I learned summer concerts were cancelled, and I knew this was going to be a long stint of not working.”

Rowland applied for and received the first round of the CERB and is undecided about what to do next. “I didn’t really expect to be making money while streaming,” he says. “But it feels kind of sustainable.”

He says that he’s still learning about the medium, and interested in working with it more. “It’s interesting to have a shake-up… and because I have no choice I’m just embracing it,” he says. “I don’t want to glamorize or diminish the serious nature of this, but generally I value a little bit of chaos and the things that it can bring creatively – I feel like I’m a bit used to accepting [the chaos].”

Saskia Tomkins and her husband Steáfán Hannigan are folk musicians living in Baltimore, a rural village south of Rice Lake, in a home that doubles as a music studio. The pair play music in a number of different groups, as a duo and as solo performers.

Before the pandemic, they earned income through gigs and festivals, selling their albums, teaching music lessons and collaborating with other artists. Hannigan also works in theatre as a technical director.

Tomkins is immunocompromised — she recently recovered from immune thrombocytopenic purpura (ITP). Since March, her family has been helping out with her grocery shopping and other errands.

For Tomkins, this time at home has meant reorienting her attention. “For the first month [it felt like there was] this massive effort for [artists] to perform and be super productive, but I felt I didn’t want to do anything but sit by the window and sleep… I talked to some other people and started to feel like it’s okay to stop and okay not to produce all the time. From that, I’ve emerged and am now feeling very productive because I gave myself time to be still.”

“I didn’t panic about the financial implications, because I knew the government would come up with something, and in the first week we had some fans paying it forward,” Tomkins says, adding that a few clients were paying in advance for future work. “The CERB has been a godsend.”

Tomkins and Hannigan have tried live streaming, but Tomkins says video doesn’t give her the same rush as live performing. “I find the performing is my drug. In normal circumstances, if I don’t have a couple of gigs a week, I get down. I’m very much a people person and I need people to lift me.”

The pair got their live audience a few weeks ago when they were invited to the Palisade Gardens Retirement Home in Cobourg to do an outdoor performance. Tomkins recalls that she and Hannigan played on the road and residents joined in from their balconies.

At one point, a resident joined from his balcony with an accordion and the duo jammed with him, and later on a neighbour dropped by with her daughters and started Scottish country dancing.

And two weeks ago the pair played at the Empire Crossing Retirement Community while residents watched from their balconies.

“All they have to do is open their window and there’s live music, that’s pretty extraordinary,” Hannigan says. “We’re natural born entertainers and we like to help people, and this is how we can.”

Karol Orzechowski is a Peterborough-based rapper and musician producing under the moniker garbageface. For the past few months, he and Mark Rand, bassist for local punk band Crossdog, have been working on music for a new band called STAKES, and on May 1 the duo released a new punk album called S/T.

Much of the music on the album was written and recorded before the pandemic. Orzechowski recalls recording the vocals for the album in late March at a recording studio/office space he shares with another artist. “At the time, a lot was unknown about how long the virus lives on surfaces, so we were trying to figure out how to do things safely in a shared space,” he says.

Fortunately for this project, their collaboration process was largely unaffected as each artist recorded their contribution in his own recording space. After Orzechowski sent the vocal tracks, Rand finished the album and in April the pair were ready to release it.

Orzechowski reflects that the pandemic measures have reshaped the options on the table for promoting new music. In the case of this album, the duo dropped it out of the blue. “It was a surprise, we didn’t do any events or any kind of promotion in advance, we just let people know the day it was available.”

Pre-pandemic, a listening party or album release show may have given the album launch a bigger impact, but Orzechowski doesn’t want to get bogged down by that way of thinking. “It feels like maybe not the right time to release stuff because you can’t properly promote it,” he says. “I’m still intending to release music while this is going on, I’m not going to let it affect my creative process. I think it’s important for artists to work through ideas at their own pace.”

This momentum continues in his work on a new garbageface album. He tells me that recently, while spring cleaning, he uncovered an old photo of a lamppost (pictured left) that has sparked inspiration: “I usually like to base my albums around themes… The photo has a vibe and I’ve been trying to write music with this vibe in mind.”

This article was adapted from a Peterborough Currents email newsletter sent to our subscribers on May 22, 2020. It was lightly edited to fit the new context. To read the original newsletter, click here. 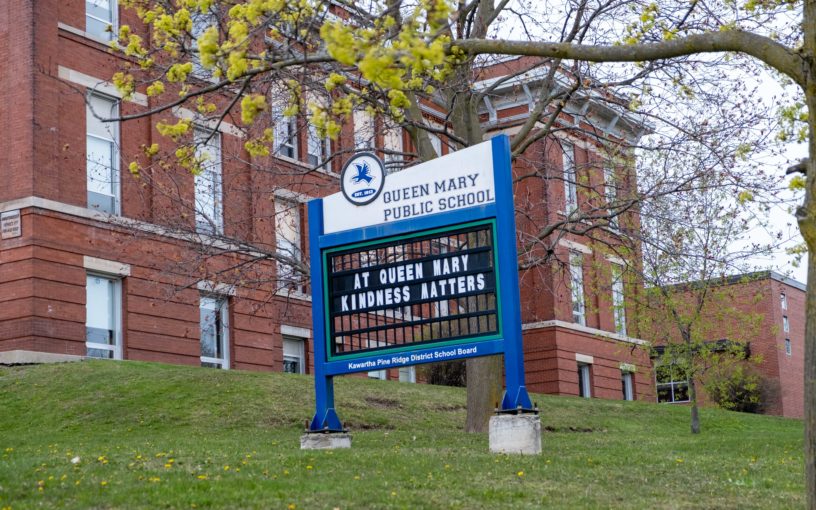 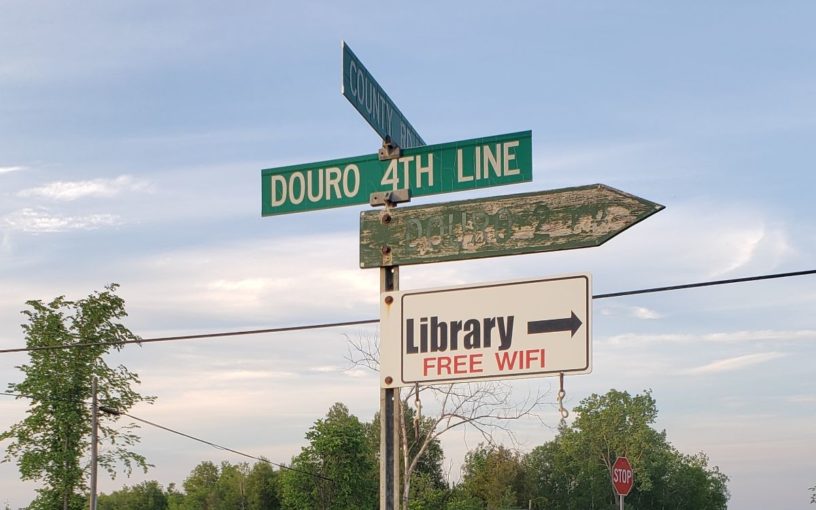